Well ahead of the EU’s recent announcement for 55% emissions reductions, Finland is counting on its electrical professionals for carbon neutrality.

EuropeOn member STUL, the Electrical Contractors’ Association of Finland, had to move their building services engineering seminar online. Still, the event was a great success and allowed for constructive exchanges on the pathways to carbon neutrality for Finland, one of the most ambitious among EU Member States in this regard. As the EU will now examine the next steps to meet the new climate target, let’s see how electrification will underpin the Finnish journey to zero-emissions while supporting local and skilled job creation.

According to Armi Liinamaa, Ministerial Adviser from the Budget Department of the Ministry of Finance, who representing the State in the seminar, projects supporting the electrical engineering and construction sector in the carbon neutral recovery package of the Government’s recent supplementary budget include doubling the energy efficiency allowance to EUR 40 million, increasing the allowance for electric vehicle charging infrastructure by EUR 2.5 million as well as providing an additional allowance of EUR 45 million for the replacement of oil heating.

The Government’s climate and energy policy that aims for carbon neutrality directly is also seen in the operations of Senate Properties, a public utility responsible for state-owned properties. According to Senate Properties’ action plan, emissions from the use of buildings should be made carbon neutral in the next few years. Senate has already moved its power consumption to completely carbon-free electricity. Consequently, it is impossible to make the carbon footprint from electricity consumption any smaller.

The next alternative for reducing the carbon footprint is to pay attention to the emissions caused by construction, maintenance and procurement. Senate Properties has paid attention to the action models of ecological construction for a long time, although there are still many challenges with the construction of large wooden buildings, for example. Senate Properties has determined that the volume of solar electricity produced on the roofs of its properties will be increased from the present 0.25 megawatts to 5 megawatts by 2030 in terms of peak power. Currently, the yield of the solar electricity systems installed on the roofs of state-owned buildings is equal to the annual consumption of one fairly small office building, i.e. 1.5 per mill (0.015 %) of the electricity used by state-owned buildings.

In his speech, Kai Puustinen, Managing Director of STUL, reminded participants that the installation of solar panels, the electrification of transport as well as the implementation of many other carbon neutrality objectives all call for a large number of skilled electrical engineering professionals.

– More than 300 solar electricity systems should be installed in Finland every week for the next 10 years in order to achieve the EU’s target level for renewable energy, said Puustinen.

According to Jussi Kuusela, Chairman of STUL, the construction sector has survived the coronavirus crisis in Finland with fairly little disruption, although it is evident that the economic downturn, if prolonged, will also affect construction even if resources were assigned to recovery.  In this situation, the money set aside for recovery should be targeted at speeding up all public projects that need to be implemented in the near future in any case.

– We could start paying back renovation debt in particular at an accelerated pace. Instead of paying unemployment benefits, we could, for example, renovate run-down schools so that they are safe for their users and pay for the work done. Compared with many other sectors, construction is a good recovery target because money can be invested in something that is of permanent use and in things that have to be done at some point in any case, Kuusela said. 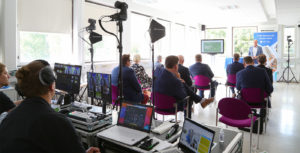