Although Europe still suffers from the Corona Pandemic, German electrical contractors see the situation as astonishingly optimistic – that’s the result of the traditional springtime survey of ZVEH, the German electrotechnical association. The results of the survey show that the upward trend continues. And, despite Corona, the trade has grown in 2020 regarding turnover and staff.

General business outlook, which is a very reliable indicator for the economic situation of the trade, stays stable since autumn 2020 at a very high level (80 percentage points). Only at the beginning of the crisis, in April 2020, as a result of the first shutdown in Germany, it showed a short-time drop (55,6 points).

Recovery course holds up
Asked for their actual evaluation of the business situation, nearly 66 percent of the survey participants* said their business was running well. One year ago, it was only 30 percent. One reason for the steady recovery since May 2020 is that electrical contractors were systemically recognised as essential by the German interior ministry and could therefore go on working during every shutdown.

Number of orders is rising

Even more optimistic is the evaluation of future business development. In this area, scores have already reached the pre-crisis level of February 2020. Although crisis continues and the vaccine campaign is still not running at a high level, German electrical contractors are optimistic that the business situation will improve (21,6 %). 63 percent think their situation will remain as it is and only 15,3 percent expect a decline. One reason for the upward trend is that the number of orders has further increased. While in January 2021 only 39,3 percent of electrical enterprises had orders for more than two months, it stands now at 49 percent, nearly as much as in pre-Corona times (52,9 %). The number of orders is a very important indicator for the trade as the high level of orders helped the contractors through the very first months of the crisis.

The optimism is also motivated by the knowledge that climate protection and e-mobility as core topics of the electrical trade will still be very important when the crisis ends. Digitalization as another core topic has even got more attention because of Corona and will continue to be a growth market for electrical contractors as well. One thing is sure: renewable energy, building automation, the development of fibre grids and electromobility – in all these areas there is a rising demand for electrical know-how!

Speaking of recovery, there is yet another indicator showing that the signals in the trade are positive: the number of available jobs has risen again and has reached a new high since the beginning of the corona crisis. 59 percent of electrical enterprises are looking for staff – a figure that shows enterprises are no longer holding back with the search and that the economic situation is relaxing further. In comparison, before Corona 65,7 percent of the enterprises were looking for staff, in May 2020 it was only 31,9 percent. A quarter of the jobs offered were apprenticeships (24,5 %). Actually, 39,5 percent of all enterprises who participated in the survey said that they were looking for at least one apprentice. Before the pandemic it was 41,8 percent.

Respectable growth in 2020
Until now, electrical contractors have come through the crisis without real damage – an impression that is supported by the data of Statistisches Bundesamt for the year 2020. According to the official data of the German Federal Government the turnover of the trade rose from 66,1 billion Euro in 2019 to 68,4 billion Euro in 2020 (+ 3,4 %). The number of employees rose as well to 515.715 which is an increase of 0,9 percent compared to 2019.

*The survey was conducted from March 22nd to March 26th 2021; 1.200 electrical enterprises participated. 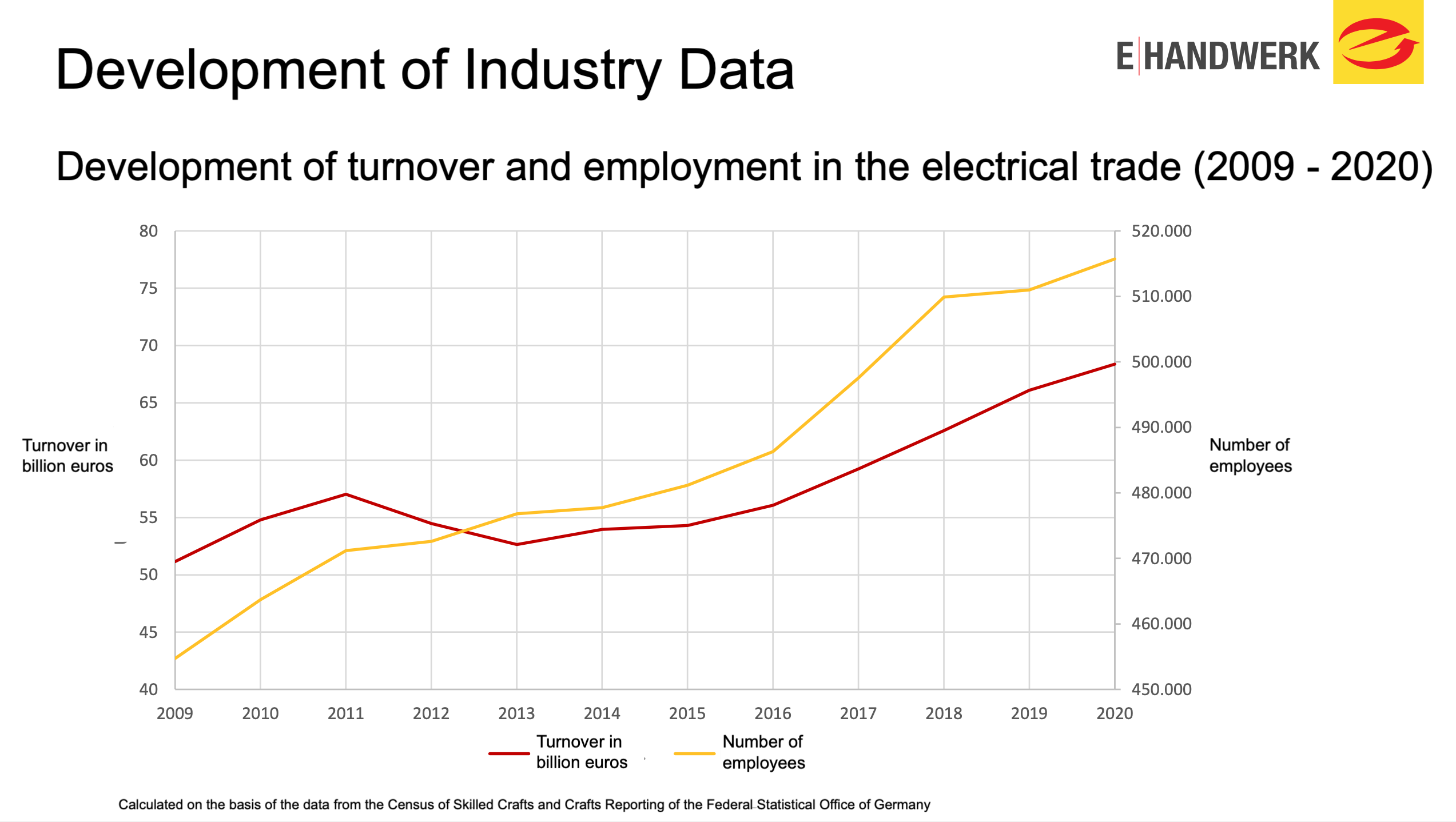