There has definitely been a positive change in people’s approach to being more energy efficient and sustainable. Thirty years ago, these issues were nowhere on the agenda. A decade later, those in the commercial sector especially, began to realise how energy efficiency could reduce their bills. But it is only recently that using less energy and being greener has become an important issue for everyone, and even then, the two concepts are not always linked. How many times do we still see an empty office building all lit up after working hours, or an empty home using the heating system whilst the family is away?

Passive measures to save energy

Today, there are some obvious passive measures that can be taken to save energy in a home or building that can be implemented easily. Where possible, the bioclimatic aspects in the design phase of the construction should be considered, so that the building is orientated to benefit from the right amount of natural light, natural ventilation, etc. Using the right materials can offer not only sound insulation, but protection from extreme thermal fluctuations, reducing the need for additional heating or cooling. And even after the construction is complete, consumables such a lightbulbs can be replaced by energy-saving LEDs, and timers can be used to control heating systems.

Active measures to save energy

Active measures can also be taken to increase energy savings, drastically. For instance, whereas traditional thermostats automate heating and cooling activation based on room temperature, modern thermostats use smart technologies to add a whole new set of features to guarantee energy savings, such as integrated sensors that turn the system off and on based on movement in the home or office. Likewise, smart devices can be used to activate ventilation, lighting and other room functions as well as heating, according to the use of the room and external conditions.

The combination of such measures can increase the energy efficiency of buildings significantly, but there is still a need for a change to a more sustainable world, which cannot be achieved through energy-efficient projects alone. We need to move to the next level: energy management with KNX.

The IEA’s Digitalisation and Energy technology report <IEA (2017), Digitalisation and Energy, IEA, Paris <https://www.iea.org/reports/digitalisation-and-energy> states that electricity use in buildings is set to nearly double from 11PWh (petawatt hours, where 1PWh = 1015 watts = 1,000,000,000,000,000 watts) in 2014 to around 20PWh in 2040, requiring large increases in power generation and network capacity. Digitalisation, including smart thermostats and smart lighting, could cut total energy use in residential and commercial buildings between 2017 and 2040 by as much as 10%. Cumulative energy savings over the period to 2040 would amount to 65PWh – equal to the total final energy consumed in non-OECD countries in 2015. 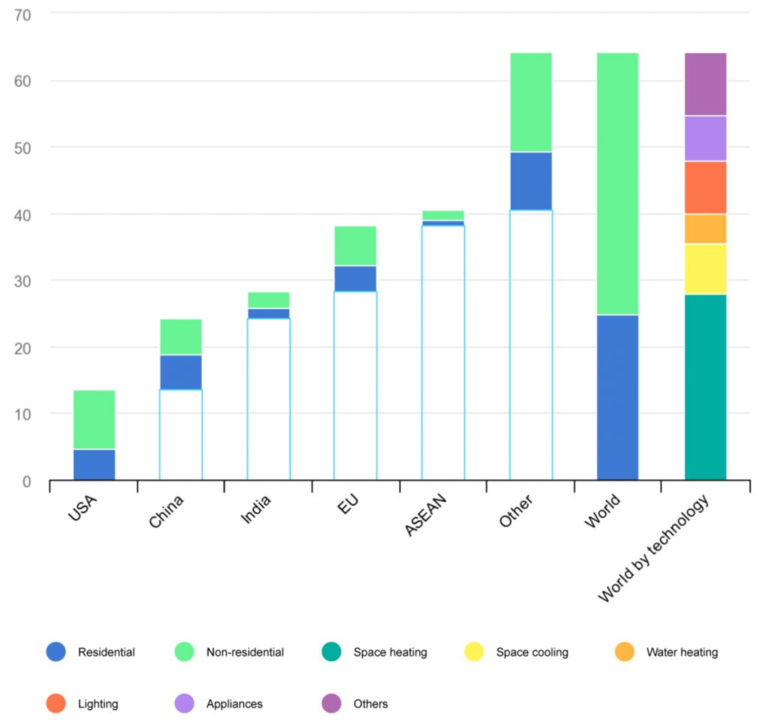 Energy management using KNX allows a system to supply uninterrupted energy according to the needs of users at any given time. This same system can also decide what is the best thing to do with the energy in the home or building, starting from its generation through to whether it should be consumed or stored, according to the key parameters of being efficient and preferring energy from renewable sources.

KNX has a lot of experience in energy management applications. For instance:

More recently, KNX has been extended with new application domains that are expected to grow in the near future:

The pace of digitalisation in the energy sector is increasing, resulting in improved safety, productivity, accessibility, and sustainability of energy systems. In addition, public awareness of living in a more sustainable world has increased in a way that it is changing markets, causing new business models to emerge. KNX is already working with this new reality, and offers an exciting range of energy management applications, devices and solutions. For more information on KNX and energy management, don’t miss our next article on this series of Energy Management with KNX!